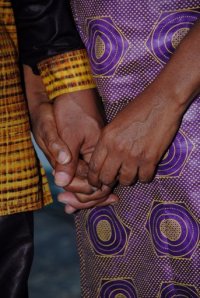 Because it’s my parents’ anniversary (but more importantly because I’m lazy), I decided to repost this.

When I was younger, I understood the key word in that statement to be “shelter”. With the help of private primary schooling, my parents protected me from everything it seemed to me. Every party in high school meant a new argument about the curfew imposed on me… all I knew was pick up time ended in “p.m.” as opposed to “a.m.”. Every argument meant a fight I would lose… I heard stories at school about friends receiving permission from one parent to do something after the other parent said no, but my parents were a unified front – no divide and conquer techniques would work on the pair who answered my questions with an “I’ll talk to your father about it and get back to you” or a “Sounds ok, but don’t take that as a yes, let me check with your mother.” And every lost fight meant an explanation after – slammed doors would be opened, their momentarily raised voices would be apologized for, my shoulders tense with effort to hold onto anger would be hugged loose.

The “grown up” part is very important. I have been amazed at how much my relationship with Daddy has bloomed with music – erratic but smooth jazz melodies, witty kaiso lyrics and simply chill reggae meditations. The jazz I didn’t love at first, the kaiso I didn’t take the time to know, and the reggae I could just never take the time to sit with him in silence before. And now, I wear my mother’s clothes, wrap my head in her fabrics, and am seeing more of her face in mine everyday.

Now I know the most important word is “love”. My parents as a unified force have loved me in ways I could not begin to know how to thank them for. They have given me a blueprint for life, not only in the way they treat me – but in the way they treat each other. Forever understanding. Forever supporting. Forever growing together from ballroom dancing lessons, to raw food diets. I have grown up seeing a love that most persons can only dream of… and as I return each year and see them look happier and more in love than before, I know that for them, 25 years is only the beginning.

My time in ridiculously beautiful & fabulous St. Kitts has come to an end. Today, I board a plane that will take me back to the cold and lonely town that I rent an apartment in (I’m not sure I will ever refer to it as home). These songs are on repeat.

Fyah stirrers, you have any songs or comforting words to offer me in my time of need?

I’m cheating since I finally found the music links for this carnival… welcome to the songs that (for the most part) had us skinning out on the road in SK.

I was anticipating the release of this song since I heard Small Axe perform the chant (just the chorus) when I was home this summer. When I first heard the song, I was seriously let down – I thought they could have done so much more. But hearing it 200 times, wukkin up on the road to it jouvert and my love of Ras Kelly’s riddim box won out and I do get excited when they ask me “Can you feel it, you feel it, tell me can you feel it?” and wasn’t too upset when it won Road March.

I appreciate Grand Masters – they’re a band that’s actually made up of real musicians. That being said, these days Grand Masters does bore me. I like this song and it was nice to jam to on the road but I actually completely forgot about it until I went searching for the GM releases for this year.

I have no words for how disappointed I am in Nu Vybes this year. I am/was a big Sugar Head (Nu Vybes is known as the Sugar Band so Sugar Heads are diehard fans) and have been making excuses for them for the last few years but when J’ouvert is early Dec 26th and you release your songs on Dec 22nd, you’ve reached a new level of ridiculousness. I didn’t even want to post a song for them and I absolutely refuse to post that One Order song that cyan ketch me till now. I so vex I like “Oxygen”. Anyway, here.

This was the song I had to be Road March. Although it “borrowed” significantly from a Haitian commercial, what music doesn’t use samples from Haitian commercials these days? This carnival I officially became a Kollision fan – the band seems to work hard, their live performances have been hype, their sound is clear on the road and they aren’t one of the big 3 bands (Nu Vybes, Grand Masters, Small Axe) and have the potential to break their monopoly. As you listen to this song you need to do the big shake dance. To not would be disrespectful.

This mix performed live does mek me practice wukkin up on me head like de young girls dem. Riddim!!!!!!!!!!!

Any of the songs hitting your sweet spot? Did I miss any that you loved this carnival, fyah stirrers?

I haven’t been home for a carnival since the 2008/2009 season. Four years is a long time, so I expected to be surprised by how much carnival has changed – I still don’t know yet if it has or not – but what I was actually surprised by is how much I’ve changed. So here’s what I’ve learned about myself thus far:

1. I am too old to go out of my house at night, stand in the middle of the road and wuk up. For those of you who don’t know Party Central, it’s a nightly jam session that takes place at the centre of town leading up to and during carnival with various DJ’s and/or bands. It’s often packed with people I know (of), except like the 2 train in the Bronx, only Kittitians I have no desire to see. I don’t know what it is about wukkin up in the middle of the road next to a stationary sound system (yes, I just found the technicality to exclude Last Lap from this rule) but I just can’t get down with it.

2. I am too old to go out of my house at night, stand in the middle of the road and watch people. Again, I don’t know why this feels so much more entertaining at a club or a more closed off space, but it does.

3. I have too much past in this place. One of my friends is visiting and the number of times I stop to hug some random man who she’s never heard me mention before (and I’ve told her about a lot of people) or explain to her why I’m not a fan of some person is ridiculous.

For those of you who don’t know, it’s carnival season here in St. Kitts. After a particularly awful three months away from my home, I have returned to wuk up on J’ouvert morning, eat my parents’ food, soak up some much needed sun, and  be an unproductive human being in general so today’s links are in honour of Carnival and my return.

One of these days, I will do an anthropological/feminist study of winin’ across islands but for now all that I have to go on is some big island (or at least non-Kittitian) advice as a starting point i.e. A Womyn’s Guide to Straight Winin’ Culture: Part I. The rules of wukkin up/winin’/jamming are quite different in St. Kitts (or at least in my head). For example, I firmly believe that scandalous wukkin up is only allowed with one gentlemen per night the exception being parties that last more than five hours (who say Inception?) – please note that this rule does not apply to J’ouvert which does not occur at night. But as I said, it’s a starting point.

St. Kitts-Nevis has had quite the political saga going on of recent involving land swaps, canceled Parliament meetings and no-confidence votes for our Prime Minister. This kind of political upheaval has a lot of unpleasant consequences – the tension, the petty Facebook bickering, the general air of instability – but one ‘good’ thing that could/would/should come out of this is sweeeeeet Kaiso! Calypso semi-finalists have been chosen already and although I have not listened to this season’s calypso yet for once I might make sure I go to the epically long Calypso Monarch Semi-Final competition, because I’m convinced nuttin does mek calypso sweet like politics.

Look out for the music post on Add Fyah and Stir this Wednesday – I promise to share anything I find that documents political drama and/or encourages misbehavior of the waistline variety. Happy weekend Fyah Stirrers!

Since starting school again in August, I’ve caught what one of my professors terms the “hazard bug”. The first ten minutes of my first class on hazard mitigation, disaster recovery and climate change adaptation, I realised that this was where (at least part of) my heart was. Since then family, friends and my cohort have had to put up with every other phrase out of my mouth being “hazard mitigation” or “disaster management”. Hurricane Sandy did not help this. Colorlines’ article on Hurricane Sandy and climate justice did an excellent job of summing up why I’m now passionate about hazard mitigation and climate justice.

All this as Caribbean emergency management professionals prepare for the Caribbean Conference on Comprehensive Disaster Management next month. The theme of the conference this year speaks to the importance of regional coordination and cooperation which will be essential as small islands contribute so little to carbon emissions, but will feel the brunt of the effects of sea level rises (anyone heard of the Maldives?).

Speaking of small beautiful places, there was a great little touristy summary or why St. Kitts is amazing on Repeating Islands a few days ago. Didn’t catch it? Well, here. I return home in less than 3 weeks, and the article served to remind me of all the extremely touristy things that I will be doing when I go home. If you’re not going to be in St. Kitts on the beach, enjoying carnival, hiking up the volcano, you should be extremely jealous. Just saying.

(s)ex & other things you shouldn’t be doing….

i have been unforgivably MIA. my apologies fyah stirring family, but school has been kicking my ass so hard i haven’t even had time to remember i’ve been forgetting to post.

i am not going to explain the title of this post, why i thought it was appropriate, or my feelings on any of the songs in here. you’re just going to listen, think about some bad choices you’ve made in the past and will make at some point in the future, and evaluate your life – not mine :).

3. Mos Def & The Isley Brothers – Beauty in the Dark (Groove Wit You)